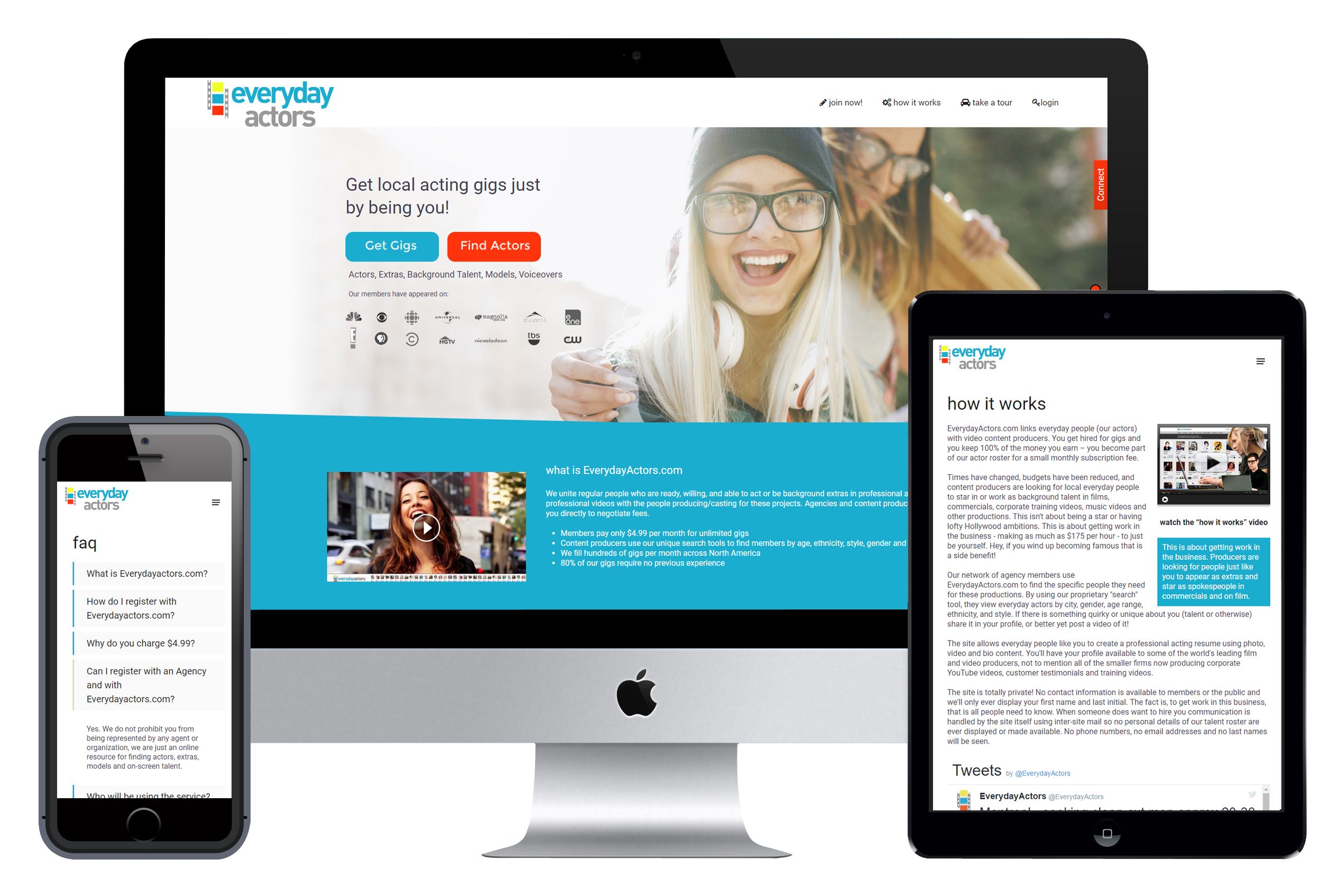 Are we having fun yet?

To launch a unique website requires some planning. You have to let people know it exists and do so in an interesting way that explains to them how it works and why they should care.

For everydayactors.com, this was designed as a solution to a problem we had: how can we get regular 'everyday' people to act as extras in videos – and do so without paying an agent or talent agency for the privilege?
Client

Great idea - but where do we start?

To launch a unique website requires some planning. You have to let people know it exists and do so in an interesting way that explains to them how it works and why they should care. Regarding everydayactors.com, it was created as a solution to a problem we had: how can we get regular, everyday people to act as extras in videos – and do so without paying an agent or talent agency for the privilege? Not only did we want to avoid breaking our budget, but we often needed people for less than one hour, sometimes even just minutes, and traditional billing structures don’t work with those sorts of timeframes. We tried waving a $20 at pedestrians, hoping to catch the adventurous types who actually do talk to strangers, but that took almost half the production time and we knew there had to be a better way.

Who were we going to be? Who was our target? What sort of experience should the website offer (for both actors and the video producers who need to hire them)? How was it going to make money?

We had to decide, and we had to figure out the right 'feel' of a site like this, the tone and layout would flow from that. We discussed multiple names, bought a few domains, liked one and then changed our minds to another, then discussed it all some more and settled on 'Everyday Actors.' It was simple, obvious, it said what it was and felt approachable. This brand name was to be for regular people who didn’t consider themselves to be actors, so it couldn't be intimidating and it had to engender a feeling of 'I could totally do that!' in our potential members.

Stage 2: Refining the concept and building the site

At this point, we had the name and the general style and tone of the site sorted out, but had to actually put metaphorical pen to paper and design the logo, layouts, write the copy and code the ‘back end’ of the site to actually do what it needed to. We went through variations on the logo and general design and discussed and refined them until we were sure we had the right vibe and began testing out the functional parts of the sign up and search processes.

We knew the site had to be easy to use, work quickly and let people either make a profile (and add images/video/bio) or allow agencies to sign up, search for actors and contact them – and do so without any clunky extra steps, or any confusing or irritating hoops to jump through. So, we worked up a basic profile structure, a way to add images (limited to six) and video (youtube videos only) and some biographic text so casting agents could really get a strong sense about a potential actors experience, appearance and (ideally) how they were in front of the camera. Once that was in place we needed a way that actors could be contacted without displaying their personal information – so we built a contact form into each profile allowing our member agencies to send a message about acting gigs but without showing more than the actors first name and last initial. Meaning, nobody sees contact information unless the actor replies. We did this to make member profiles just a little bit more secure and private, because our actors trust us with their data.

For our agency members, we needed to make life easy – when they need talent, we allowed multiple ways to refine the search criteria to speed things up and find the people they need in a few minutes. To do this, we needed to create a list of features that actor sign-ups would choose when creating a profile (age range, city, gender, ethnicity, style, etc.) and still allow our agency clients a way to search with all categories unselected or as many as they like, to make sure they were in control of the experience and could be as specific or as general as needed for a particular project.

We had a great site, that worked well and was ready to go – but it was empty! We knew we couldn’t drive traffic to it yet, it had to offer something for the very first casting director to sign up, it had to have real people who wanted to act as extras in commercials, or web videos, and above all both actors and those who hire them had to understand how the site works and why they should care about it.

Our first step was to get actors signed up. We offered free membership and placed ads in free and paid online classified sites, along with select newspapers. We didn't have long to wait. Having free sign ups also allowed us to make sure the process was working seamlessly before we monetized with Paypal, and to finesse a contact/support structure that made it easy to contact us but managed the way in which we received information to make it easy for us to reply and stay on top of any issues that could come up. Once we had a few hundred actors in the database, it was time to invite the casting agents, directors and any business that needs to make how-to videos, or online video promotions and would have use for extras.

We quickly realized it wasn’t necessary to spend a lot on ads to get a solid response, never mind the irony of doing so to promote a site based on saving money. We shifted focus to a mixture of free ads on craigslist and kijiji and used social media (mostly twitter and facebook, with a few dabs of tumblr) to promote the site, the experience and the 'everyday people like you getting acting jobs' message.

With twitter, we post upcoming gigs or news relating to our agency clients, both as a way to promote the site and to let people know the type of projects that are happening in as up-to-date a fashion as possible. We use facebook to offer tips about auditioning, industry news, and on-the-job examples like photos sent in by actors on set.

Response so far has been enormous, as the inexpensive sign-up fee for actors is just high enough to make sure people are serious about working and low enough that just about anyone can afford it (a cup of coffee a month) and the agencies who hire actors can create an account for free.

We remain ready to adapt to the future and have built a flexible site that can be tweaked to fit new ways of interaction and expansion, and based on member and agency feedback everydayactors.com can improve as needed, when needed. We’re very proud of the work we did on this and think the concept is strong and can work beyond the acting industry as it really streamlines the process of locating and hiring people, and does it all for far less than you would traditionally pay.

Check out the video: